TEDxVienna | What if you were forced to flee?

What if you were forced to flee?

For all of us having spent summer 2015 in Athens, Italy or Spain, the refugee crisis was never only a rigid statistical graph or some abstract numbers flickering on a television screen. Since the probability of us being born in a country falling apart is only a bat of an eyelash away, numerous agonizing “what ifs” occur. I had the chance to meet numerous bright minds both stricken by but also fighting against the migration crisis. What I learned?

That charity and solidarity are two different things.

And that fleeing is just as painful as staying.

– An article dedicated to solidarity –

“What if you were forced to flee? What would you take with you?”

First, I asked random strangers on the streets of Pireaus. “Photographs, our favorite novel, an address book”, they told me. Piraeus is a port city where thousands of refugees have and will disembark with the intention to continue their odyssey towards Ithacas in Northern Europe – a port city haunted by an long-term unemployment share of 77.3%. A place where the economic crisis has left one of its most discernible fingerprints.

But why take an address book with you on a journey of approximately 3725 km. (Syria-Germany) when you don’t have an address anymore? Why read a book and sink into a novel, when your life has turned into an open-ended story? And regarding the photographs…

When you flee from hell, why take a souvenir with you?

Refugees and people involved in human rights organizations on the other side did not hesitate to explain to me that in the boats crossing the Mediterranean and the trucks passing the eastern European boarders there is no space left for nostalgia and romanticism.

Your culture, your social mores…you take them with you just as much as you take yourself on this journey. And you don’t fit into a backpack.

Besides the essential papers, people affected by the migrant crisis showed me that they packed mostly money, medicine and water. Sometimes even valuables like jewelry in order to afford potential spendings on their way. Their ancestor’s heirlooms in exchange for their children’s future: a price yet to be paid by thousands of refugees and migrants. Read more about the exact content of the refugee’s backpacks and the stories behind them on thequardian.com. 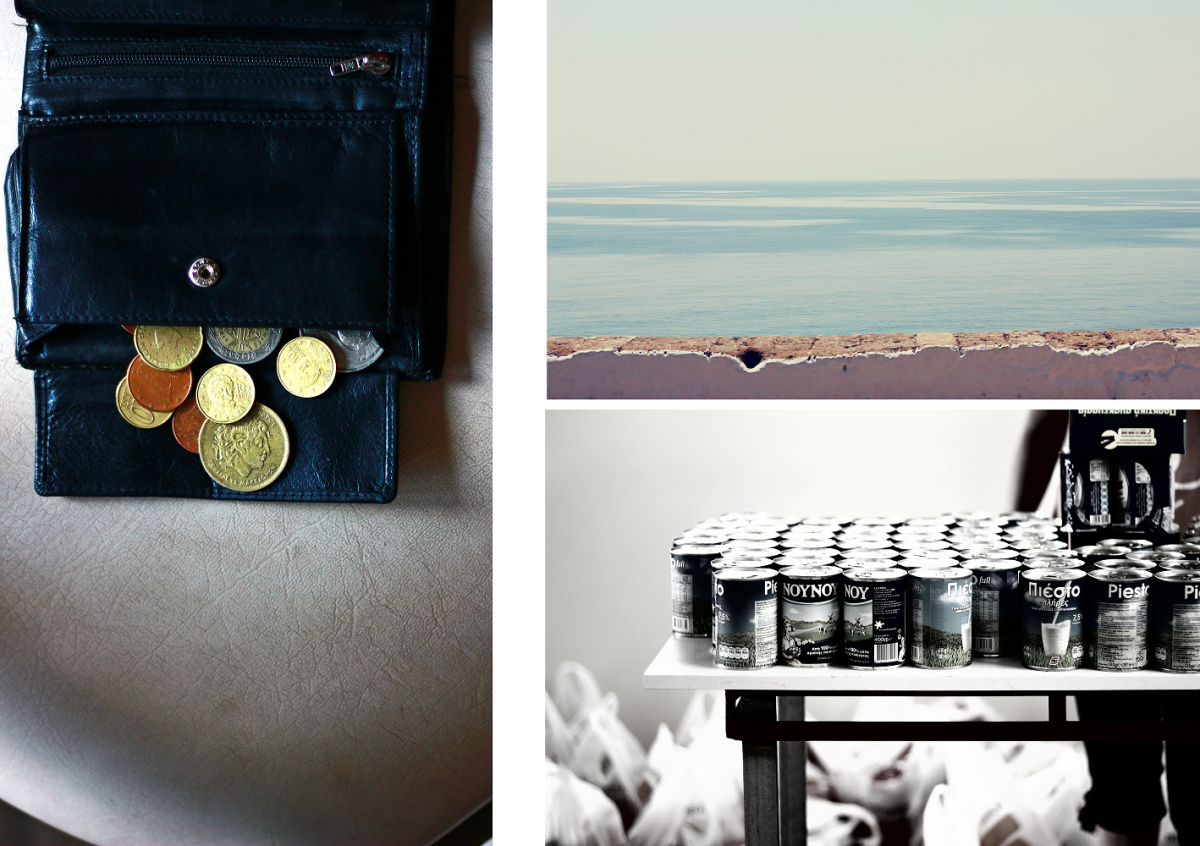 After crossing the sea, refugees and migrants are bound to continue their journey with their lifetime savings. In the meantime, NGOs prepare basic food packages for those arriving both in Piraeus and on the islands.

I don’t believe in charity. I believe in solidarity. Charity is so vertical. It goes from the top to the bottom. Solidarity is horizontal. It respects the other person. I have a lot to learn from other people.

In the depths of the crisis, need equals need. This is why Solidarity Piraeus , a non-governmental organization founded by volunteers in order to support people in need and living in the city of Piraeus, distance themselves from charitable activities and appeal to the people’s solidarity, inside and across the Greek boarders, too.

The team of Solidarity Piraeus during their General Meeting.

Along with medical and legal support, the organization provides meals, extra tutoring in Greek, English, mathematics and history to children regardless of ethnic origins. Moreover, refugees and locals are given free access to psychological support: emotional first aid as an attempt to erase the marks that war and impoverishment have left on people.

A crisis as chance

It is worth mentioning that while on a supranational level, though European institutions’ practical politics has not yet reached an agreement on the migrant crisis, the European identity has proven itself stronger than expected.

Medication, equipment, provisions and financial support are being sent from organizations and private persons from Germany, France and Ireland directly to Solidarity Piraeus; the inspired, the enterprising, and the very aware choose to travel directly to the politically and socially fragile harbor city. 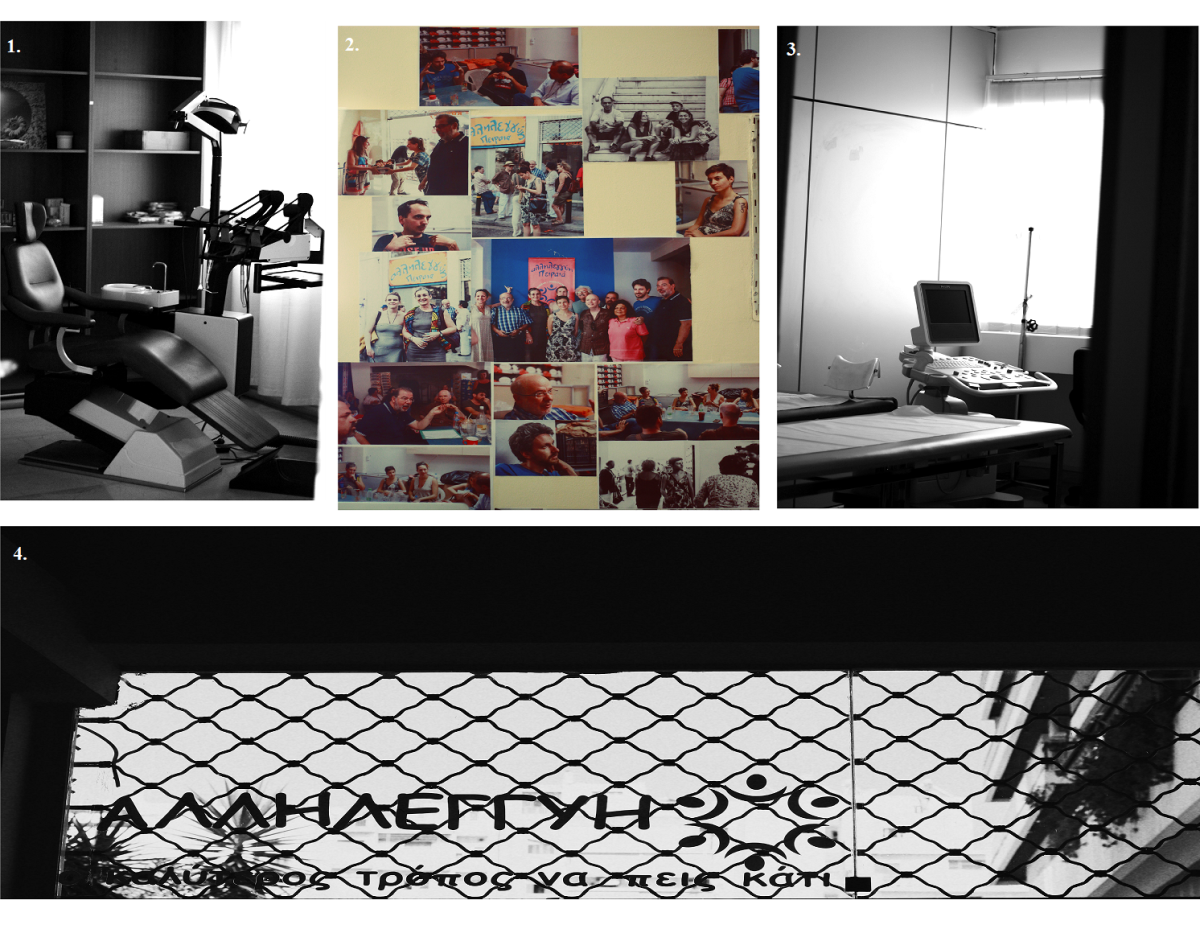 Thusly I had the chance to meet the team of Geneeskunde voor het Volk from Belgium and a member of the Greek Solidarity Committee in Frankfurt as well as numerous locals, unemployed and those excluded from society, willing to strike at the heart of these problems rather than getting lost in a never ending abstract discourse.

But what if the current issue – refugee’s social inclusion – strengthens the weakened ties between the North-South divide within Europe? What if the fact that Greeks and Syrians both resort to soup kitchens and free medical care eventually has a determining effect on the collective EU identity and responsibility?

We are trying to build a better world here. We don’t mind who’s in it – a member of Solidarity Piraeus’ Pharmacy explains.

Therefore concerts, photography exhibitions and sports events are on the organization’s agenda. Perhaps because healing wounds is not enough for the locals or the refugees planning to settle down in Greece. Perhaps creating content, contributing to a common goal, becoming members of an open dialogue is just as crucial. Or perhaps, despite all adversities, a good glass of wine after an evening of music is sometimes enough.

There is no doubt that the European society has made a significant effort to welcome refugees and to make room for the “What ifs” they carry with them in their backpacks. Nevertheless, there underlies a question so much more terrifying and excruciatingly painful, a question avoided to be asked. A question 800.000 people run away from, abandoning the leftovers of their home country.

What if you were forced to stay?