TEDxVienna | From Virtual to Real: the first VR meetup in Vienna

From Virtual to Real: the first VR meetup in Vienna

A few months ago I was introduced by a TEDxVienna friend to Google Cardboard, a viewer made out of card box, lenses and an ordinary button, all to be assembled by yourself in 3 steps. Basically a low budget Virtual Reality (VR) headset. It literally blew my mind and opened a whole new world! Sounds cheesy to you? Well then I think you haven’t tried it yet, but you definitely should DO IT!

Anyhow, VR is making quite a splash currently, as a number of gadgets, which make virtual worlds accessible for the masses, are said to be released in 2016.

In Vienna, more and more people are drawn into the VR universe. One of them is Gabriella Chihan Stanley. She decided to organise Vienna’s first Virtual Reality Vienna meetup which took place at the end of January. The meetup provides a meeting platform for people interested in VR and is free of any commercial interest. Gamers, VR enthusiasts, newbies and tech geeks could finally meet and exchange their experiences at Vienna’s VR hotspot vrei. An opportunity that cannot be missed! So I went there. Entering vrei, I got my name tag including an avatar name and the program booklet introducing the 3 speakers of the evening.

Past, Present and Future

Annette Mossel kicked off the event by giving a historical perspective of VR and showed us what the future will bring. As a postdoctoral researcher at the Institute of Software Technology and Interactive Systems at the TU Wien she had the first Oculus Rift headset already in her hands in 2012. 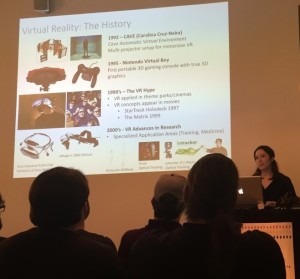 Yep, one has every right to envy her! But there is also a good reason for her privileged position. Annette and her colleagues work on a variety of VR-related projects. In particular they try to improve tracking in large complex scenes. This effort led to an application which guides you at the airport to your gate in real time.

Other projects focus on virtual rehabilitation (patients can practice to control their prosthetics in the virtual space before even receiving it), natural 3D interaction in handheld VR (for example playing Jenga with your friend, meaning you need to interact with the virtual objects aka removing a Jenga piece) and combining physical motion with immersive 3D simulation. In the latter project, also known as the Virtual Jump Simulator, one can perform a virtual parachute jump over the city of Vienna. This really involves jumping! But only from a small scaffold in the TU lab and the rest of the experience is created virtually. Annette clearly pointed out that although VR regularly blows our mind researchers are still challenged by obstacles like VR motion sickness, and incorporating haptic interactions. 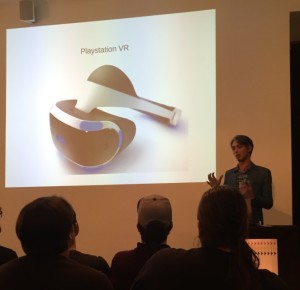 Next in line was the man of the house Timon Liebau, the CEO of vrei, a VR lounge that opened last November. Timon is not a VR developer nor has he the technical knowhow to create a headset, but he rather described himself as a heavy user. As he sees it, VR was already there in the 1990s but today the perspective changed and 2016 will thus not be the year of VR but rather the year of the VR headset.

To follow his passion of VR gaming, the VR advocate decided to open vrei, which is basically a bar, in which you can come for drinks  and/or to test all the VR gadgets (for free), meet like-minded people and also get first hand knowledge from the VR pros. This sounds like a nerdy, very closed community to you? I, as a total VR rookie, felt at no second displaced there. I experienced it as an open place for hardcore devotees as well as for newbies with no prior knowledge who just want to give it a shot. In Timon’s talk we learned all about consumer-ready VR headsets, ranging from from Oculus Rift to HTC Vive.

One other surprising fact he mentioned was that vrei is not the very first VR place. In 1992, two Viennese opened the first VR cafe in Vienna. But ahead of their time, the VR hype was premature at this point of time as there were no products available on the mass market that were technically refined to meet the user’s expectations. The two are still VR enthusiasts and believe it or not they were present at this meetup.

Last but not least we changed gears. Axel Dietrich conquered the stage. He is the founder of Vienna’s first VR production company VRisch and a wizard in storytelling. VR is also hitting the filmmaking industry. There are already the first 360-degree documentaries available like Happyland, a report about Philippines slums. 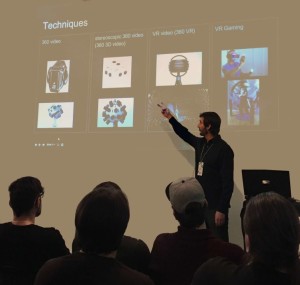 With a VR headset you can look 360-degree around you. If you think of it, this fact challenges filmmakers enormously and requires a change of thinking. For example in classical filmmaking you only see a section of a scenery. In the virtual space this frame is completely lost. Tools like close-ups are not effective anymore to guide the viewer where to look at or to capture emotional moments. Analogous to Plato’s allegory of the cave, we are currently being released from sitting and passively watching into a world, the VR space, in which we can actually see things and interact with them! This sounds like a wonderful adventure and a radical shift in the way stories will be told in the future.

But Axel pointed out that we should handle this new opportunities with care as “magic can be gone quickly” due to premature release of film material that does not properly meet expectations and standards. Axel showed us current efforts to create wow-effects like 8i placing a naturally-looking copy of person into 3D space, ILMxLab doing a great job for the Star wars movies or PresenZ working on real-time interactivity.

Curious? Then join the Virtual Reality meetups in Vienna here. See you soon!

Until then you can watch all talks here.

you can never talk enough about VR