TEDxVienna | Geek Galore: The Many Shades of Nerddom

Geek Galore: The Many Shades of Nerddom

The term nerd has fluctuated heavily in meaning in the past decade. This sociocultural shift can still be observed in contemporary society. But what exactly makes a nerd? This loaded four letter word appears to have become an interchangeable synonym with related sociocultural labels, such as geek, dork and many more. In this blog post, the manifold world of juvenile linguistics will be ventured into with a specific focus on synonyms for nerd, which aren’t actually synonyms at all.

The original stereotype of the common nerd is founded on knowledge, ambition and passion for excelling grade-wise. Initially, the term nerd was an insult, which was used to isolate the so-called nerds from their peers. Primarily found in high schools, as portrayed in U.S. American teen flicks, nerds tend to form tight-knit friendship groups, consisting of individuals who refuse to give in to peer pressure and are thus dubbed “uncool”. Therefore, it is only fair that finally the term has had its revival and is currently used as an almost exclusively positive word to describe an unusual yet intriguing character. So keep doing your thing, Nerds! 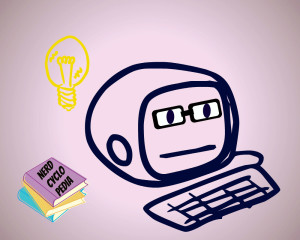 A Bundle of Passion: The Geek

The term geek has often been used interchangeably with nerd. But whilst the nerd is infamous for prioritizing their education over social fads, the geek specializes on leisure time activities which may seem unconventional for the 21st century teen: From reading vintage comic books to learning an abundance of sci-fi movie trivia, the geek does it all. Because geeks like to escape reality and embark on fictional adventures, they can often be identified with a certain glow in their eyes, when speaking about a topic they’re passionate about. If everyone let out their geeky side more often, the world would certainly be a happier place!

Silly yet Charming: The Dork

Dorks can be described just like the word sounds. A bit quirky, a bit silly and even quite endearing. Dorks are frequently characterized as goofy yet good-hearted people in pop culture. They also appear to have a unanimous sense of fashion which, admittedly, does not follow the latest trends, but never fails to stand out from the crowd. Colourful socks, which may not always match, are a trusted staple. Mean tongues claim that dorks are rarely known for their intellect but this is pure speculation and gossip. But should you ever have a dorky moment at the office then do not be embarrassed; work it!

Netizens are a large group of online users who often times comment on current social events. The term is popularly used in South Korea, where website such as Allkpop refer to active and engaged readers as netizens. These online communities are very diverse and hold a lot of social power when it comes to harshly criticising a celebrity or managing to get a desired hashtag to trend on sites like twitter. Netizens are rarely considered a group of many real human beings, because they make their appearance as large swarms of strong, mostly anonymous opinions. 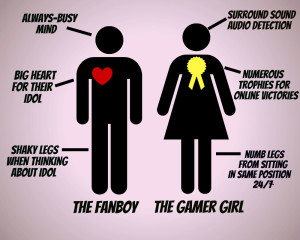 The label fangirl can refer to an individual of any gender. However, recently the term fanboy has also made more and more online appearances. Fangirls and –boys often out themselves as such when their extreme passion for a specific slice of pop culture is voiced in rather inappropriate settings, such as work or university for instance. Turning a seminar presentation into an homage to one’s favourite boyband can lead to outsiders diagnosing an enthusiastic fangirl with an unhealthy obsession in need of a reality check. But let’s face it – everyone fangirls over something. Just keep in mind: there is a time and place for everything!

Pick your Char: The Gamer

The gaming community is continuously growing and becoming increasingly diverse in terms of age, gender and social background. When the internet first found its way into domestic homes, gamers stepped up their game and managed to extend their community into the World Wide Web. Just like nerds, however, the gamer has been said to pick feuds with fellow gaming brethren. Similarly to what can be found in fan culture, the gamers disapprove of those joining their club, who are not authentic enough, i.e. bring along much experience or fulfil any other requirements which render you deserving of the title “real gamer”.

In the end of the day, everyone shares at least one of their traits with any of the stereotypes listed above. What is important to be remembered is that stereotyping a person wholly will never be beneficial for either side. However, using such labels with a grain of salt can make life a little bit easier for certain people – especially when terms are used lightly and in the most positive manner possible. Taking an unpopular term and owning it may even lead to newly found self-empowerment! 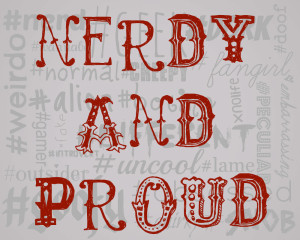 All images created with Ribbet.com