Prior to her talk at last week’s TEDxVienna, I had the opportunity to interview LA-based investigative journalist, podcast host, comedian, and animal rights activist Carrie Poppy. What can I say? I was blown away by her warm, candid and down-to-earth personality. Read for yourselves.

Hi Carrie, you have won awards with your podcast “Oh no! Ross and Carrie” – could you explain what it’s about?

Carrie: The show has been going on for five and a half years and we investigate all sorts of extraordinary claims from joining fringe groups undercover, including a few months undercover in the church of scientology to getting alternative medicine treatments, to being part of a UFO group. All sorts of wacky claims that we get to examine and hang out with these people, see what they really believe in.

What have you learned from joining all those groups?

Carrie: A lot of the time I’ll hear the sentiment that, oh, we’re all the same, every religion adds up to the same, and in my experience, that’s just not true. Every belief is set up to match the needs of very different people. What really unifies them all is that everybody’s looking for the truth. Everybody’s trying to answer these big questions.

Who were the happiest of all groups you visited?

Carrie: The happiest I guess has to be laughter yoga. It starts with one person laughing and sometimes it’s forced. They’ll sit there and go “HA HA HA” (imitates fake laughter) and by ten minutes in, the whole group is just laughing genuinely. And they’ll do that for hours at a time. It’ll make you ache. I had to leave the room, because I needed a break from it.

If you were to start your own religion, what would it be?

Carrie: It would put humans and animals on equal planes – I believe that we treat non-human animals really crappy. I guess my religion would be totally vegetarian and the central tenant would just be that we all look for evidence. So I probably would not have a lot of followers, because it kind of would end up not being a religion. (laughs)

If you’re going to make a claim, you need to back it up with evidence. You don’t just get to tell someone else hey, this is true, and you have to believe it, because I say so. I think that’s what really screws up religions. That’s how people end up getting abused.

You did a hilarious piece on homeopathy. You called poison control to tell them you had taken too much of a homeopathic treatment and they said, oh don’t worry, a 2-year old child can take the whole bottle and nothing can happen! Did you get angry reactions after that? 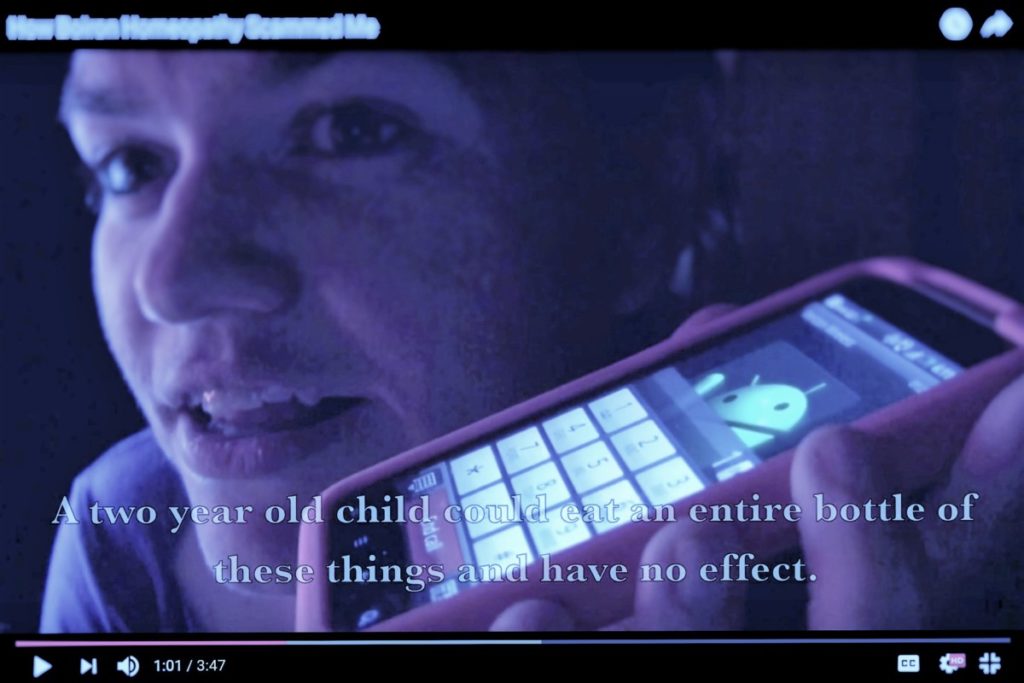 Carrie: Mostly on the internet. A lot of times the argument would be “I don’t know why you try to bring this down when it works for me.” If you want to claim that works for you, that’s fine, but it’s a completely different claim than “this is science, this is medicine and it works better than placebo.”

Though it’s a known fact that placebos really work.

Carrie: Right, they work. But you can’t define them as medicine, because the defining feature of medicine is “it works better than placebo.”

Do you think that there are drawbacks to being a skeptic?

Carrie: I try not to use that term, but if you define skeptic, I will probably fit the definition. To a lot of people, it sounds like “cynic” and I think that’s certainly the main drawback. It sounds like you’re taking a position from the outside, and you don’t really believe all this phony baloney, which isn’t how I feel. I feel more driven by curiosity. I guess I’m more of a critical thinker.

At TEDxVienna you’re talking about the paranormal. Which character would you be in the latest ghostbusters movie?

Carrie: I asked my boyfriend the same question. “Which character do you think I am?” And I remember thinking, I wish I were like the really cool one with the crazy glasses, but I think I’m probably more like the really nerdy one. Because she tries to dig through the data the most. But I’m not reserved like Kristen Wiig’s character or shy in any way.

Do you have a favorite conspiracy theory?

Carrie: I really like the conspiracy surrounding the “Black Dahlia.” It was a famous murder that took place in Los Angeles in the ‘40s and was never solved.

We’re almost done and I need to ask you this: How does it feel traveling as an American to Europe during this outrageous presidential election?

Carrie: When I left I tweeted “I’m going to be away from the US for a few days and when I come back I expect everything to be fixed.”

I’m trying to get every woman I know to vote. If every woman votes, then the outcome will be good. It’s scary and it’s kind of embarrassing.

In Europe we have an equally embarrassing situation of extreme right wing parties gaining ground and large numbers of people voting for them. Would you ever consider going undercover in an extreme political group here?

Carrie: I guess if someone would pay to get us out here. But our rule is that they have to make an extraordinary claim. As long as they did, I’d be open.

Carrie: We don’t tell what we’re planning in the short term, but if someone writes to us and says “I really hope you do X” and it’s on the list long term we’ll say oh yeah, that’s on the long term list.