TEDxVienna | O Home, where art thou?
Vienna through the eyes of the homeless.

O Home, where art thou?
Vienna through the eyes of the homeless.

Vienna, ranked “the most livable city”, is often associated with music, art and coffee… but let us scratch the beautiful surface and see what is hiding underneath. 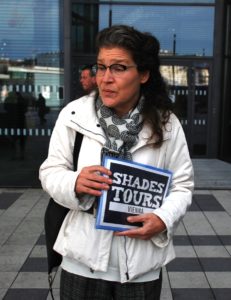 far from all match the stereotypical view of the homeless person – a person with shabby, dirty clothes, suffering from alcohol or drug addiction or mental problems. No, there is more to homelessness than meets the eye.

Did you know that there are different categories of homelessness? There are also different reasons for becoming homeless. Sometimes it can start as a choice and turn into involuntary homelessness, like in the case of writer and former journalist Becky Blanton. More often, however, homelessness is not a choice, it simply happens. A layoff. An illness. Addiction. Debts. Or, it is a lesser evil. If you think that it cannot happen to you, you would be wrong. It can happen to all of us. Like it happened to Barbara, a highly educated entrepreneur who founded her own art gallery here in Vienna in 2008. Then life happened and threw her a curve ball. 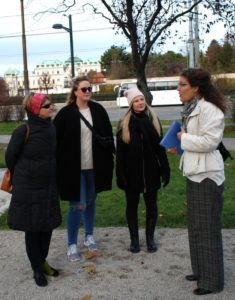 Vienna through the eyes of a homeless

TEDxVienna met Barbara on a SHADES TOURS tour. These are tours during which a homeless person guides you through the hidden or unseen sides of Vienna and introduces you to the complexity of homelessness. You learn about Vienna’s social security system, which sounds rather good… if you are eligible for social benefits that is. How do you book a bed at a shelter? Is there access to healthcare? What about food? On the tour, there were many questions, all excellently answered and explained by Barbara.

In contrast to many other cities, Vienna hosts numerous organizations that work together to form a network supporting the homeless. Caritas, SAM, neunerhaus, Samariterbund, wieder wohnen are just a few. Some of these are partially funded by the government or by the city of Vienna, others entirely through private donations. Since 2015, there are also companies that help homeless people by hiring them as tour guides. SHADES TOURS is one. Supertramps is another. With the birth of these Start-ups, Vienna joined a recently growing trend: city tours led by homeless people. These tours serve multiple purposes: to inform people about homelessness, show a different side of the city, to reduce prejudices, and ultimately to empower the homeless and help them get back on track.

It was an impactful meeting with Barbara, and her story further exemplifies that the homeless are just people who got thrown into difficult situations from which it can be challenging to escape.

To the question if there is anything regular people can do to help the homeless in Vienna, Barbara came with some suggestions: 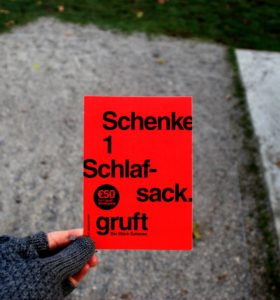 You can also spread the word, join a homeless person on a city tour, or bring your friends to the Gruft’s Christmas Hut for some Punsch or Mulled Wein. Alternatively, you can follow in the footsteps of Rex Hohlbein and just say “hello” next time you see a homeless person. In his TEDxRainier talk, Rex Hohlbein describes how his occasional conversations with homeless people kicked off into a grass-roots movement that helps addressing homelessness.