TEDxVienna | What Is The Link Between Garbage And Creativity?

What Is The Link Between Garbage And Creativity?

If you’ve noticed the trash cans around Vienna, then you know they try to lure you into doing the right thing with playful phrases and creativity. Most of the time it’s difficult to find English equivalents for the witty slogans without providing lengthy explanations. When friends visit from out of town, I like drawing their attention to the sayings on the garbage bins. Below are two of my favorites. 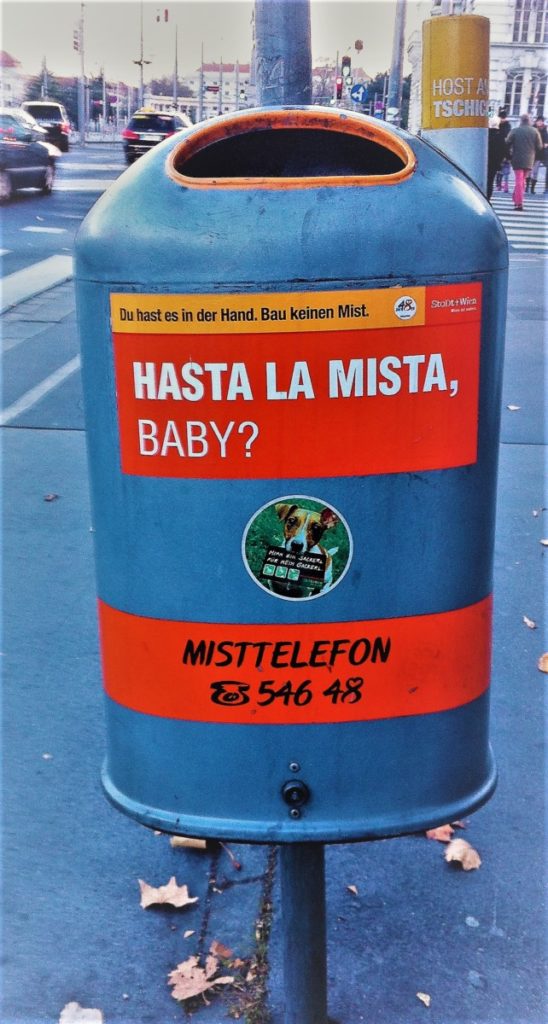 A take on the Arnold Schwarzenegger line in the movie Terminator 2, here meaning “do you have trash, baby?” 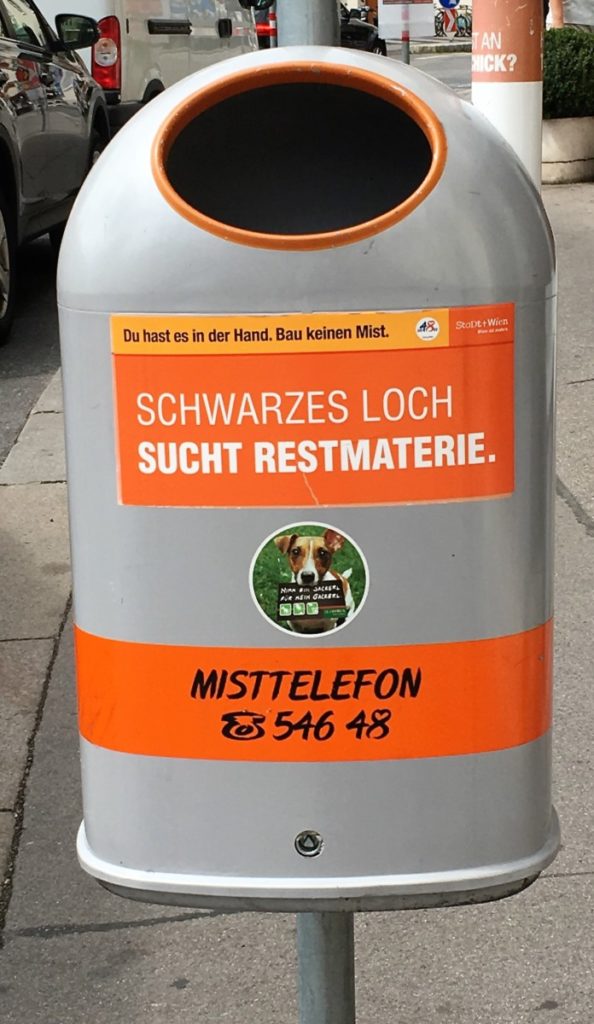 “Black hole looking for material residue” reads this bin. A picture of it is also hanging at the Vienna Planetarium.

When it comes to reducing or handling waste, it seems cities need creative strategies to catch your attention. Bright colors are more effective in raising awareness against littering, showed a psychological study by the Humboldt University of Berlin. Vienna and the German cities Hamburg and Berlin all participated in the study and are following the same principle. In this case playfulness, humor and bright colors. Garbage bins in the city often address the passerby directly: “I’m not picky”, “Give me a reason for hanging here”, “I need more input”, “Feed me”, “Your papers, please”.

Vienna first started labeling trash cans with playful slogans in orange in 2007. The first time around, employees came up with the ideas, and the Viennese were asked to vote for their favorites. Later, in 2015, residents were asked to submit their ideas in a creative collection and voting process. Just because they’re not asking for new quotes at the moment, doesn’t mean you can’t post suggestions on their Facebook. So if you’re feeling creative, just do it.

Things And Ideas Have More Than One Life

This brings us back to what garbage has to do with creativity. It just so happens that waste management and creativity have a common denominator: the idea of recycling. Basically, the notion that things and ideas have more than one life or use.

I couldn’t help but be reminded of that idea when entering the brand-new recycling place in my neighborhood recently. There was an unusual looking orange phone booth filled with books. What type of Viennese Schmäh is that, I thought to myself. As it turns out, if I had carried a used book with me, I could have traded it for another one. Pretty neat… 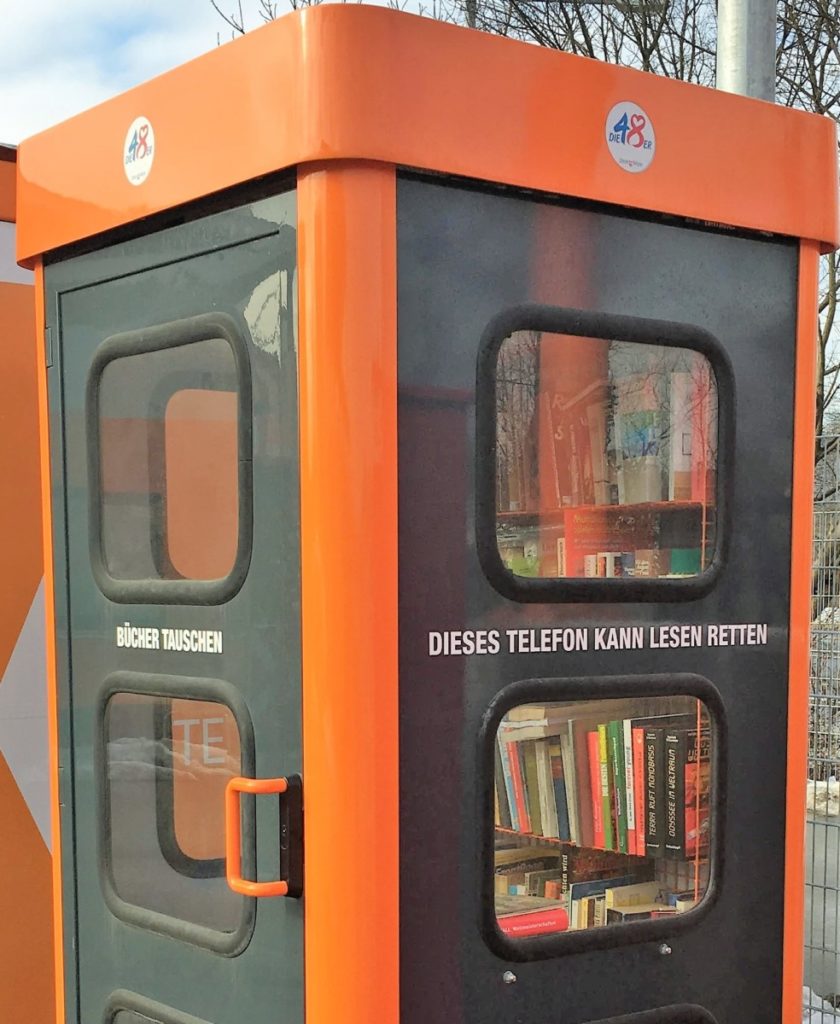 “This phone can save reading” is written on the booth’s side.

Creativity as an Upcycling Process

While downcycling results in creating products of lesser quality based on recycled materials, upcycling stands for creatively reusing waste to create materials of higher value or better quality. If you’re not sure how this may be connected to creativity, listen to what Austin Kleon has to say in his TEDTalk.

The creative process is basically an upcycling process according to Kleon. He quotes the painter Pablo Picasso who said that “all art is theft” and the poet T. S. Eliot:

“Immature poets imitate; mature poets steal; bad poets deface what they take, and good poets make it into something better, or at least something different.”

The author of “Steal Like an Artist” claims that in art nothing is original and that the history of creative ideas is, in truth, an endless recycling process. To unlock your creativity, you’ve got to learn to “steal like an artist” by first identifying and collecting stuff you love, and stuff you love is always worth upcycling or stealing from. If for example you’re trying to write, you’ve got to read authors who inspire you. If you think this means you have to spend time at the library, think again. Kleon demonstrates in his talk how he upcycles newspapers into poetry. He thought he was being creative, until he traced similar works by other writers going back in a 250 years’ line of influence.

Garbage In, Garbage Out

If every idea, like Kleon argues, “is just a mashup or a remix of one or more previous ideas” then the creative person is a “collector” who selects items to collect with care. Kleon even uses the catch-phrase “garbage in, garbage out”, which both means that you have to surround yourself with beautiful garbage you can reuse, and also points at the mashing up and remixing process of creativity. It’s sort of like hanging out at a flea market: the greater the stuff surrounding you, the more your creative juices will flow. Because the creative process is a remix of things one decides to put in or chooses to leave out, to re-organize, turn inside out or upside down, and transform.

To come back to Vienna, a place I recently discovered is the 48er Tandler in the 5th district. The space is less of a flea market and more of a secondhand store with a love for detail and retro chic. Arranged in different sections are electrical items, skiing equipment, bikes, pottery, clothes, books, and more. There’s a guitar collection on one side, and retro radios and sewing machines on the other. 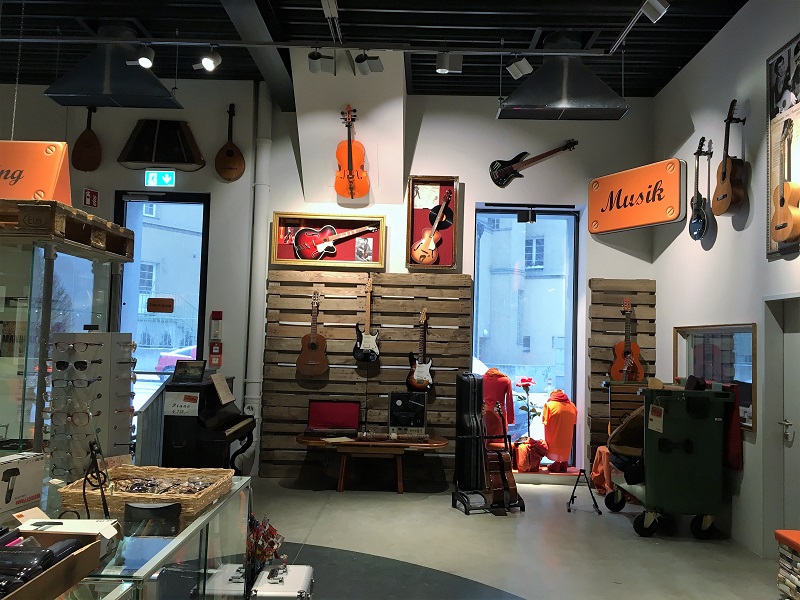 The guitar section of the 48er Tandler shop in 1050 Vienna.

In the middle of the shop is a half-open circle that houses about 1,000 books, the majority of them in German though there are quite a few titles in English. The concept is an award winning one and it is so photogenic that the Austrian public television channel ORF regularly hosts a book show here.  If they served coffee, I could have sat and read for hours on end. 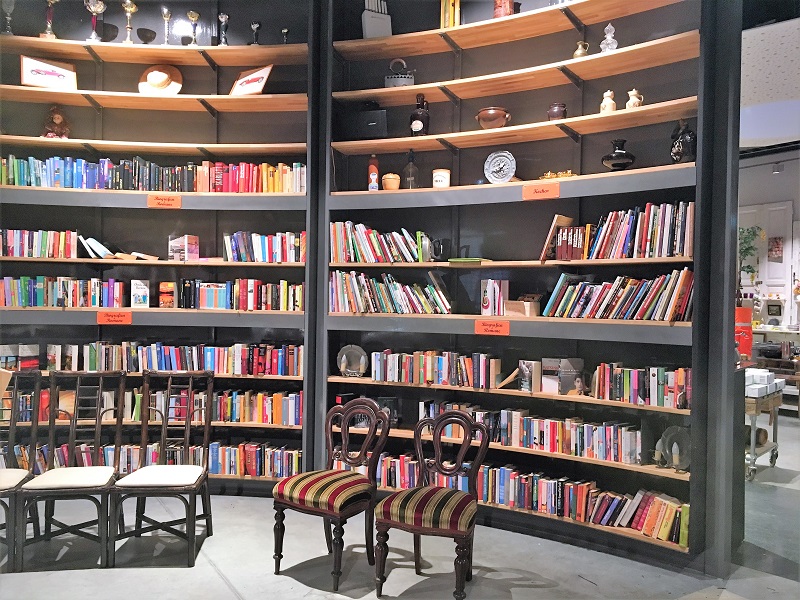 The Beautiful, the Useless And the Obscure

Stuff that ends up at the 48 Tandler shop was dropped at the Tandler boxes at the various garbage collection areas around Vienna. Perhaps what’s no longer of use to you, can make someone else happy, that’s the whole idea. Though sometimes seemingly weird things find their way into the boxes, like this obscure piece of equipment below:

What the heck is that? One of the weirdest objects to ever land in the 48er Tandler box. The magistrate posted a pic of it on Facebook. (Image credits: MA48) 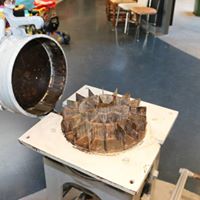 Ta-da! That’s what it looks like when open. It turns out it was used by bakers to create equal dough portions for “Semmel”, Viennese rolls. (Image credits: MA48)

Another thing that garbage collection and the creative process have in common: the process of cleaning up and discarding, recycling or swapping is a process of subtraction or getting rid of unnecessary stuff. Or the way Kleon puts it

“In this age of information abundance and overload, those who get ahead will be the folks who figure out what to leave out, so they can concentrate on what’s really important to them. Nothing is more paralyzing than the idea of limitless possibilities.[…] creativity isn’t just the things we choose to put in, it’s the things we choose to leave out.”

Image credits belong to the author, unless stated otherwise.